Have you ever dreamed of running your own airline? Convinced you could build a super airline if only you had control over aircraft types, seating configuration, advertising, service levels, pricing and maintenance?

Here is your chance. With our popular PC based AIRLINE Simulation software you can test you skill on your own PC against the computer.

AIRLINE can be as detailed as the user wishes to make it. AIRLINE can be played in regions or globally, a user can decide price levels by aircraft or by individual segments. Service levels, encompassing such things as meal service, business lounge access, headphones and luggage allowance even newspapers, can be controlled across the entire fleet or again by individual segment.

Promotional items such as playing cards, in-flight magazines and model aircraft are also taken into consideration and advertising measures can be implemented on individual cities or across an entire network and include choices covering various media formats.

AIRLINE includes over 700 aircraft variations, a configuration setting allows users to turn on or off the facility to include prototype aircraft such as the original 747-300 Tri Jet which was never developed but AIRLINE allows users to experiment with these types. 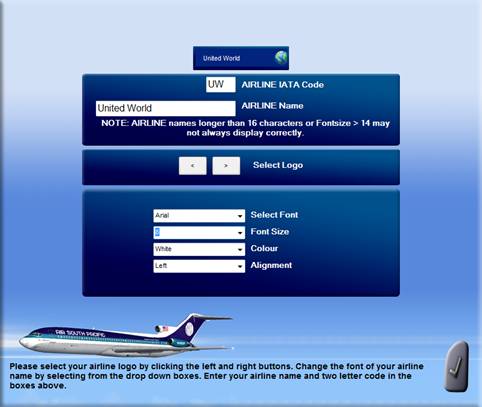 Airlines can start subsidiaries, shift operations from long haul full service to a becoming a low cost budget airline. Users can decide whether or not to implement a frequent flyer program and what rewards should be made available to the members.Given the turbulent times we live in, AIRLINE allows users to decide on the level of security or additional security measures they will take as a company including the passage of Sky Marshals.

With enough time and resources a player can build a fleet and schedule thousands of aircraft on unlimited segments. The simulation includes over 7000 airports with details including runway lengths & curfew times.

AIRLINE allows users to select their starting year, any year from the mid 1940’s to present day. This enables game play to start with a post war DC3 and make fleet decisions based on actual release dates.

This is a serious hobbyist simulation. Don’t expect an action packed arcade game or a flight simulator. AIRLINE is a business simulation for aviation enthusiasts, professionals and students alike.

The decisions are yours – the future of this airline is in your hands. 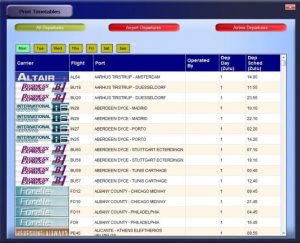 A7 allows schedules to be developed by also considering arrival times. Airlines can now schedule aircraft to arrive at off peak times or reduce fuel burn by slows speeds. Scheduling and updates can be done by week, 2 weeks, monthly or quarterly. This will allow much greater granularity in the processing of data. AIRLINE 7 displays the familiar route maps using static maps or the rotating globe.

Maintenance checks for PS are automatic, A and B checks need to be scheduled as part of the overall scheduling process. Maintenance can be outsourced or self managed. 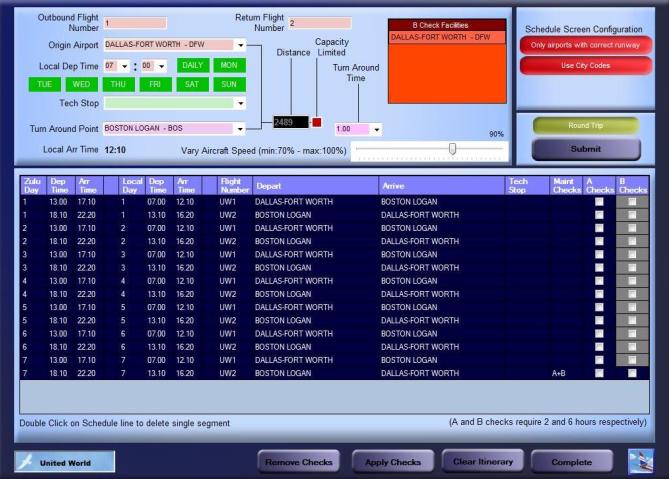 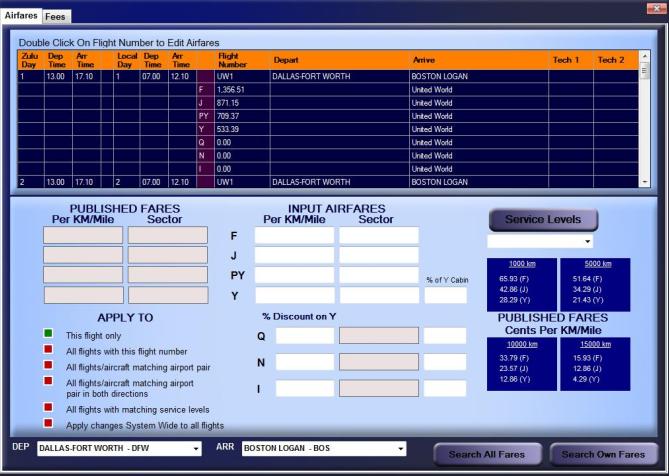 A code share arrangement can be set up with any airline in A7 that is offering the agreement. The number of seats that an airline offers for sale” to another airline is specified on the code share screen. The cost of those seats is set by the operating airline and any calculations relating to profitability should be made by the purchasing airlines. Once the code share has been signed, the seats can be marketed by the new airline as if they were in their own inventory.

Users can build connecting flights with their own aircraft, or the aircraft of the code share agreements. A connecting service can have up to 4 segments and can be all the one airline or all code share connections.

Users can control advertising through four different campaigns and if employed, an advertising manager can help advise on the best campaign investment. 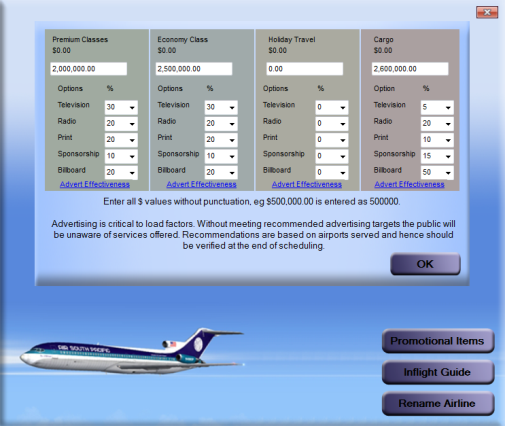 Existing reports have been expanded to now include sample operational data. The ability to research performance on specific routes and costs associated with the service can now be analysed prior to aircraft acquisition. 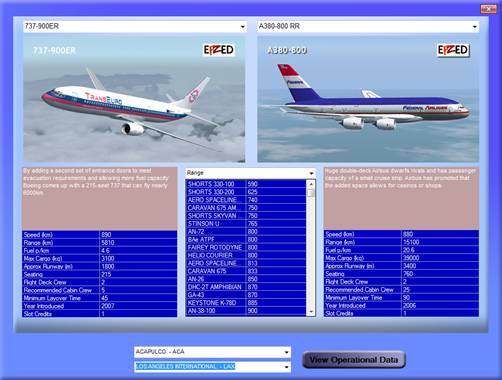 Select whether or not you offer your passengers lounge access. 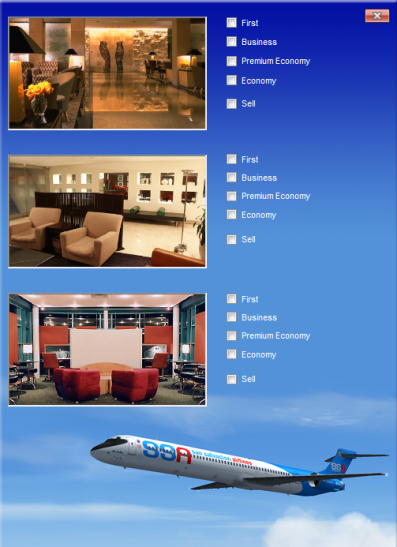 A7 includes graphical representation of aircraft configurations and now allows four classes of travel to be configured. By selecting the number of rows, the number or seats across, airlines have granular control over the seat maps generated. A7 now also allows airlines to sell space on aircraft (eg tray tables or overhead bins) for advertising. Decide the size of onboard lavatories and now includes premium economy and standing only “seats” for ULCC’s! 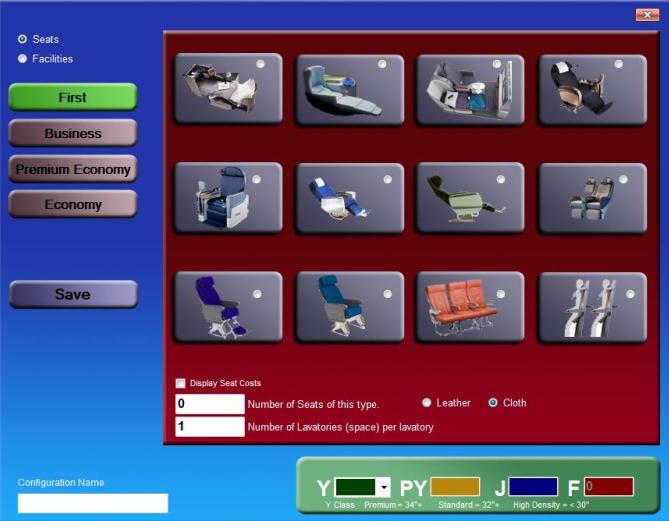 Review your airlines, or your competitors route maps and schedules. 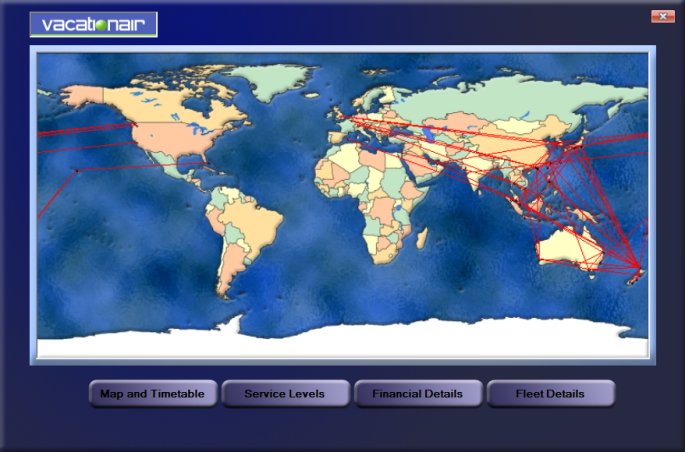 A7 allows engine types to be ordered separately from the airframe and users can now research the full history of aircraft by previous owners, service logs etc.

A7 allows airlines to purchase or lease gates at airports in addition to the purchase of terminals as used in AIRLINE 6.

A7 allows airlines to operate up to 20 different headquarters. 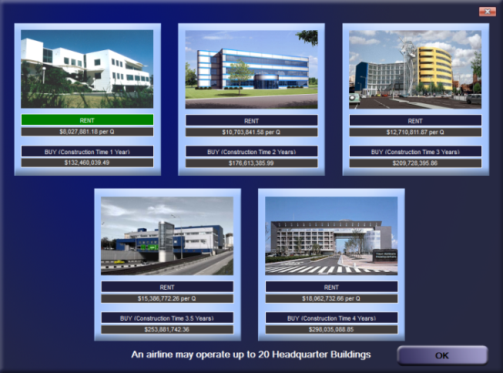 Detailed balance sheet reporting including RASM, CASM, RPM and CPM have been included into A7. Historical data and detailed analysis tools have been incorporated. 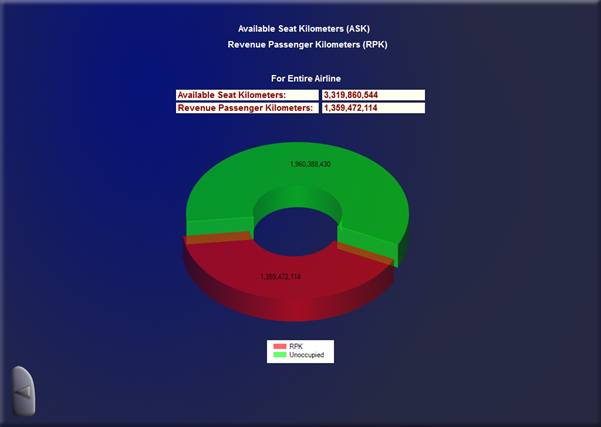 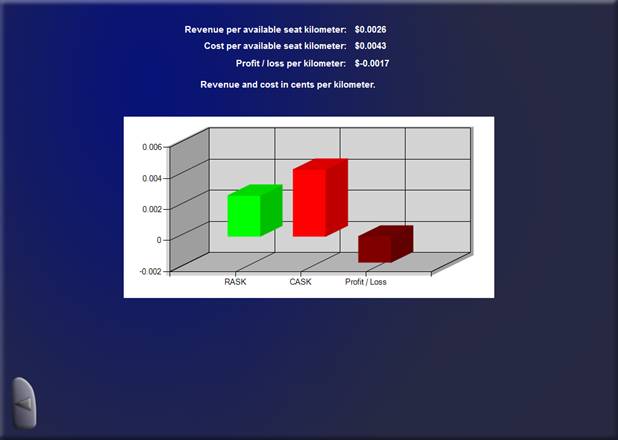 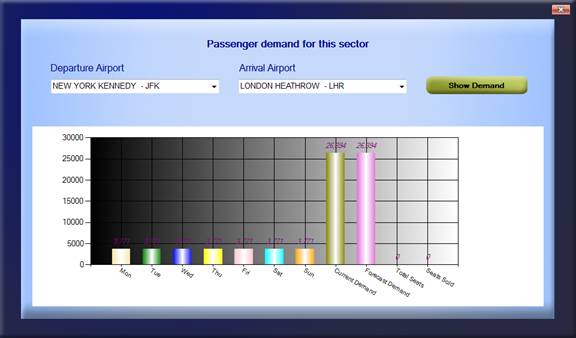 A7 has been completely overhauled to include greater random events such as weather or traffic delays or food poisoning or bird strike.

Travel agent functionality which allows users to search airfares across all airlines including connecting fares. Airlines are able to include fuel surcharges, security charges, luggage fees and an option to link fares back to service levels. 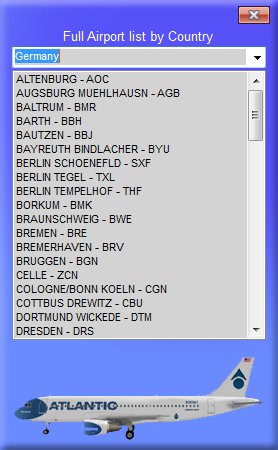 What will happen when the airlines all start to move to bio fuels? Try A7 and find out! 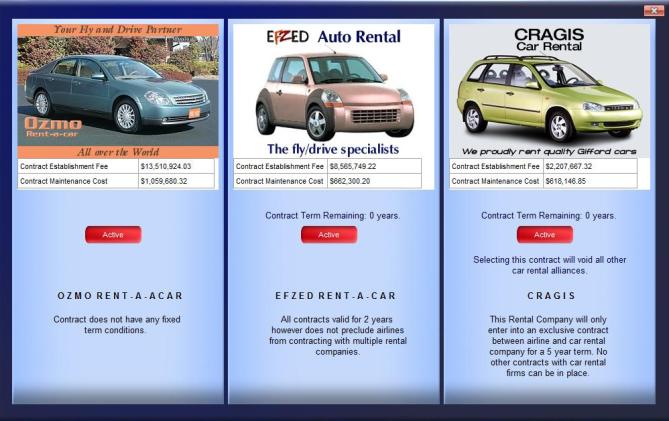 Chart flight operations have been rewritten and more closely linked with historical events.